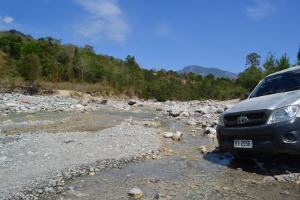 It seems like a drive to Never-never land. Treading the mud-paved road around and on the numerous hillocks en route Molop Suco in Bobonaro sub District.  You cannot but help notice how parched the land is and how dry and wide the rivers are. The landscape escapes greenery due to the time of the year, being the dry season.

Upon reaching the outskirts of the Aldeia Siligata in Molop Suco, the landscape begins to change. The first thing you notice is a huge house painted green, standing in all its resilience. At first it feels odd to see a structure of that size and strength in the middle of nowhere, especially after seeing houses along the way made of thatched roofs and shacks. Gazing on, the tombs in the Aldeia’s cemetery are covered with bright coloured ceramic tiles, children prancing around, goats and pigs running about.

Drive a little more into the Aldeia one comes upon sudden activity. A huge group of men, women and children gathered together in a frenzy of activity in what looked like a community affair. Usually one expects this kind of crowd gathering on special occasions like a marriage or death. Shockingly, the activity in progress was an ‘all hands’ house construction!

We were welcomed very warmly by all the members of the Community, while we tried to understand how Molop and its dwellers have made community work and participation the fibre of their being. 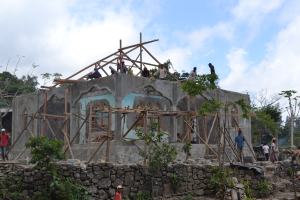 Speaking to the Chief of the Aldeia, the Ex- Chief of the Aldeia and other members of the community, we gathered that they the practice ‘Gotong Royong’. ‘Gotong Royong’ is Bahasa Indonesian term for ‘ community work’. This is a traditional practice that has been in place even before the Indonesian occupation.  The tradition has since then been carried out for the greater good. So far, 200 houses have been constructed using this practice.

Molop consists of 380 families. At any given point of time 40 to 50 people are involved in the construction of a private house or a sacred house. Men mostly do the hard labor and women help in carrying concrete, water, cooking food for the community etc. The men who function as Masons and helpers have no formal training. They say, they learnt by watching Masons during their stay in Dili. Carpenters usually belong to a certain Uma Lulik. The community chooses one, and the carpenter does the job without being paid.

‘Gotong Royong’ is practiced only during the dry season, as the Aldeia becomes inaccessible during the wet season due to swelling rivers and bad roads.

This system is used for both building of Uma Luliks and private houses. There are two levels to the ‘Gotong Royong’. First level is – financial status, number of family members (brothers, sisters, in-laws, relatives, earning children) contributing financially to the project.

Second level is the contribution of manual labor by community members and other direct and indirect assistance. For e.g., ferrying stones, wood, sand, cooking for the community etc.  The community also contributes consumables like fruits, vegetables, meat, corn etc to feed the working members.

The preparation time (to amass money) to begin building an Uma Lulik or a private house is usually 2 to 3 years.  The raw materials such as cement, iron, nails etc are bought from Malina. Other raw materials such as stones, sand, and wood are fetched from the environment around. The door and window panels are bought from Dili. The duration to build a house is around 60 days.

The communities in Timor-Leste have a very strong tradition of family and extended family belongingness. This is especially true in Molop, as the entire community lives like an extended family, by being part of each other’s lives.

The most outstanding characteristic is the strong leadership. The Ex and the current Chief of the Aldeia have a strong vision of transform Molop to be better than Singapore in the next 20 years. The Community does not depend on the State to assist or provide for them. The Ex- Chief of the Aldeia quoted President Kennedy’s famous speech ‘ ask not what your country can do for you – ask what you can do for your country’. With a strong vision and influential leadership, community participation, initiative and hard work has been imbibed successfully into the everyday lives of the people.

The community plans to request help from the State only when it is absolutely required and only when they have done everything in their capacity and still need assistance.

The Community faces various challenges even before they begin the construction. The road conditions are poor, hence the rent of the goods vehicle is 250$. When the community wants to sell their livestock or agricultural produce, they walk far distances. This is not economically viable, as it increases the costs.

The Government contracts building contractors to build or refurbish public buildings like school, clinics etc. The Contractors recruit people from the Aldeias nearby for labor.  Since this system was introduced, the disadvantage of introducing money into something that should be a community affair is seeing a spill over effect on ‘Gotong Royong’. Some members of the Community are now expecting to be paid for their contribution in community construction.

Although the vision of the leaders and the community has foresight, with the change in leadership in the future, there is an imminent threat of this tradition being lost if the new Chief of the Aldeia does not share the vision. 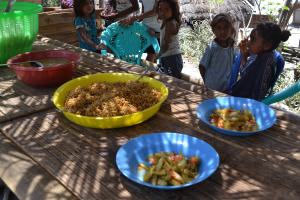 Wishing the community well, we head back from the Aldeia after filling our bellies with the food provided by the community. It is indeed a surprise to have seen such integrity, unity, vision and great planning in an Aldeia that could have been just like any other. The rest of the journey with head full of thoughts and stomach full of simple, yet delectable food, we forget how arduous the drive was, as we are filled with the satisfaction of simplicity.